It’s going to be a scorching day here in Florence—the forecast is predicting 96 degrees—so over breakfast I take stock of my options. Climbing the dome seems foolhardy, and I’d rather wait for more pleasant temperatures for the walk up to Fort Belvedere and the Bardini Gardens. I settle on some aimless exploration of the city instead. 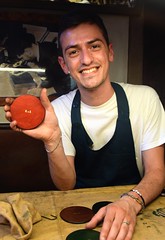 I drop by the leather school at the basilica of Santa Croce, the Scuola del Cuoio, and buy a set of handsome leather coasters for my nephew, Ethan, which they monogram in gold leaf. He turned twenty-three just last week, and these seem the perfect belated birthday present for a grown man, although when I send him a picture, I can’t resist warning him not to put cheap beer cans on something so fine, only craft brews and fancy cocktails!

I fill the rest of the day with random things, including my own version of an I-Spy game that puts me on the hunt for Clet street signs. I walk to the pharmacy of Santa Maria Novella in search of the rosewater that’s been used so liberally to scent my apartment. I stop for a late lunch under the veranda at the Caffetteria delle Oblate, which has a slight breeze and a stunning view of the Duomo. There I sit for a long while, communing with Alice Steinbach through her memoir, Without Reservations: The Travels of an Independent Woman, and enjoy my very first taste of semifreddo, a half-frozen dessert that melts pleasantly on the tongue. 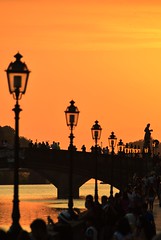 Later, I stand on the Ponte Vecchio and watch as the heat of the day dissolves into a blanket of orange light. As I stare into the setting sun, everything around me is reduced to a simple silhouette—the city skyline, the street lamps, the tourists crowding the lungarno. The sky is on fire and it is awesome to behold.

Meriggiare (v.) – To escape the heart of the midday sun by resting in the shade.

It’s another scorching day in Tuscany and whether it’s the torpid heat or the routine exhaustion that comes with travel, I’m slow to rise this morning—so slow in fact that it’s nearly noon by the time my feet hit the pavement of the Lungarno Torrigiani.

In renting an apartment in Florence for the month, one of my goals has been to explore new areas, especially those outside the crowded streets of the centro storico. Last week, I wandered through the narrow lanes of San Spirito and San Frediano looking for artisan workshops. Today, I’m heading east to San Niccolò, a neighborhood that rests at the foot of city’s southern hills. 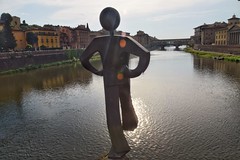 I pass the Ponte delle Grazie and spot a simple silhouette standing on the bridge’s parapet with one foot extended precariously over the edge. It’s Clet Abraham’s “Common Man” and I cross to get a closer look. That the statue is here at all is something of a surprise. It’s come and gone ever since it was surreptitiously installed under cover of darkness a few years ago, functioning, as blogger Ann Reavis says, as a “poke in the ribs” to the “all-too-serious art establishment and other red-tape loving bureaucrats of Florence.” Clet, of course, never applied for the proper permit.

Later, to explain and defend the work, he said: “The Common Man statue is intended as a stimulus to take an important and risky step.” It represents one of those moments in life where you take a leap of faith without knowing the consequences. From his perch, the next move might result in glorious flight or end with a sudden tumble into the river. “The irony lays in being part of this dangerous spectacle from the safe side of the railing. The act is permanently frozen in limbo, being a sculpture that doesn’t move and will never finish stepping out, and so will never know if his choice was the right one or not – the only way for us to know is if we were to try it ourselves.”

I’m standing on a bridge alone, halfway around the world from where I came. That’s what travel is all about, isn’t it? Stepping off into the unknown to see where it leads? I may be a rule-abiding college professor with an aversion to modern art, but let’s just say I like “Common Man.” I like it a lot. After all, even an imprudent dive into the Arno wouldn’t be a bad fate on a day like this! 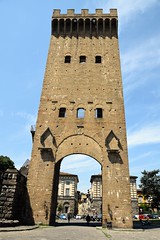 When I reach the Torre di San Niccolò, a medieval stone watchtower built in the 14th century, I think again about Clet, and not just because my route has taken me by his studio on Via dell’Olmo. A few years ago, in another of his brilliant pranks, he hung a giant nose on the tower, mentally fashioning its windows into eyes, and its gate into a gaping mouth. I’ve looked at the pictures online and now even without it there, I can’t help but see a face. Maybe it’s less impressive than seeing the Man in the Moon or the Old Man of the Mountain, the Virgin Mary in a piece of toast, or Elvis Presley on a potato chip, but it’s right there in front of me, and all because of an evolutionary wire in our brains called pareidolia. Quite simply, we see faces in ordinary, inanimate objects because we crave order in a world of chaos. We see patterns in random noise that encourage flights of fancy, transforming science into art. It’s something painters have understood and exploited since the Renaissance, so why not embrace it on the modern streets of Florence? Leonardo Da Vinci created optical illusions in his drawings, and so did Giuseppe Arcimboldo, hiding faces in elaborate collages of flowers, fruits, vegetables, and shells, with nary a complaint.

I squint up at the long, winding road leading up the hill. I’m baking here in the sun, so I climb slowly, first to a terrace of depleted rose gardens, where already many of the blossoms are curled and brown, and then on to Piazzale Michelangelo, for the finest view of the city there ever could be. I buy a tall glass of lemon granita from a street vendor and sit on the rocky ledge, catching my breath and soaking in the splendor. 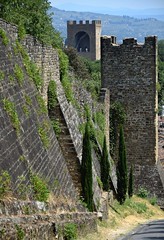 I decide to walk along the old stone walls of the city all the way to Fort Belvedere, which feels like a punishing chore on such a hot day. From Via Costa San Giorigio, I seize an opportunity to use my Amici degli Uffizi card and duck gratefully into the shade and seclusion of the Bardini Gardens, which have been beautifully restored after decades of neglect. There’s a cooling stream, acres of woodland, a wisteria arbor bordered with hydrangeas, and a long patio on which to enjoy a late lunch. Before long, I’ve almost forgotten about the heat. 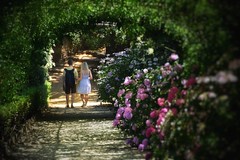 I descend the hill slowly, terrace by terrace, until finally I’ve reached the lungarno again. I rest for bit, enjoying the air conditioning of my apartment and not caring how much it will cost when the utility bill arrives at the end of the month. 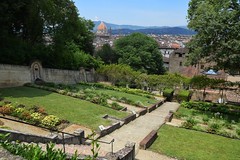 When I venture out again later, it’s back to San Niccolò for dinner at a restaurant called Zeb’s. It’s a tiny, unassuming place that I might never had noticed if not for a recommendation from Italy Perfect and a plethora of encouraging reviews on Trip Advisor and Yelp. But it’s also intimidating at first, with a chalkboard menu written entirely in Italian script, and only two rows of counter seats, both facing the bar. I’m feeling nervous, like a fish out of water, when one of the owners comes by. He’s a handsome man named Alberto Navari. He winks at me, putting me at ease, and then talks me through the dishes, advising me on a primi and secondi that are tasty and well-priced, beyond the usual tourist fare.

It’s been a good day, a quiet day, a day lost in thought.

I pass Clet’s “Common Man” again on the way back home, but this time I notice not just the outstretched leg, but also the placement of the arms, which are bent towards the waist, and the hands that are curled, as if into fists. He looks confident in his stride. Unafraid.

In a book called The Art of Travel, one of my favorite authors, Alain de Botton, writes that: “The pleasure we derive from journeys is perhaps dependent more on the mindset with which we travel than on the destination we travel to.” Perhaps he’s right. I’ve grown to love Florence and my neighborhood on the Oltrarno, and I take pride in the independence that I’ve felt here, and joy in the people I’ve met along the way. It’s been a quite an adventure so far—not just the last two weeks, but the past eight years.

Back then, I was the figure on the bridge. I’d reached a point in my life where I was static and unhappy. In booking a flight to London on a whim one day, I lifted one heavy foot and plunged it into the unknown.

Frozen in time, Clet’s man can never be certain if his choice is the right one or not.

“The only way for us to know is if we were to try it ourselves.”