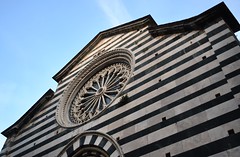 Sometimes, I bite off more than I can chew when planning my travels. Ideas that seem inspired on a snowy day in February, at times look far different once I’ve arrived and logistics begin to take shape. Today, I had hoped to go to Genoa for the Regatta of the Ancient Maritime Republics, a rowing competition that rotates annually between the towns of Genoa, Amalfi, Pisa, and Venice. Frankly, though, I’d rather not. I have a weakness for festivals of all kinds, but the information I’ve found online is sketchy at best and without a decent strategy for how to get to the venue, it feels more exhausting than adventurous. I decide to stay here instead. After days of jet-setting up and down the Italian Riviera, a quiet day in Monterosso al Mare is exactly what I need.

I take a slow stroll about town, stopping in Gioielli del Mare to buy a silver pendant I’ve been admiring in the shop window for days, one that reproduces the Gothic rose window in the church of San Giovanni nearby. I buy a sundress hanging on a rack outside a clothing store. I sip a glass of lemon granita. I unwind and relax and the hours melt by. 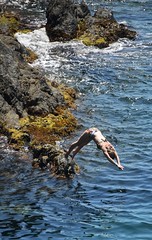 It’s nearly two in the afternoon when I find myself on a park bench in Piazza Garabaldi with a fragrant slice of focaccia bread in my lap. There are children playing on a swing set behind me, and the sound of their laughter mingles with the clinking of silverware at nearby cafés, and the cadence of rapid Italian as neighbors sit in the shade and gossip. Close by, two violinists are playing for spare change under the railroad bridge, but somewhere, too, is the unmistakable strains of an accordion—my friend and his dog. It’s a curious symphony for the senses, and I’m reminded of that scene in Paris Je T’Aime where a middle-aged woman finds herself in a similar park on a similar kind of day.

“Sitting there, alone in a foreign country,” she says in a voiceover fraught with repressed emotion, “far from my job and everyone I know, a feeling came over me. It was like remembering something I’d never known before or had always been waiting for, but I didn’t know what. Maybe it was something I’d forgotten or something I’ve been missing all my life. All I can say is that I felt, at the same time, joy and sadness. But not too much sadness, because I felt alive. Yes, alive. That was the moment I fell in love with Paris. And I felt Paris fall in love with me.”

That’s what I feel. Fully present and alive.

I think again about the woman in Rapallo, the one with the bikini who stood reading a newspaper while the sea lapped about her feet. And suddenly, I know exactly what I want to do. 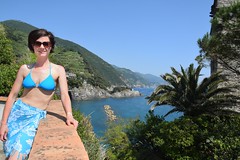 I rush through the tunnel into New Town and stop at a beach store facing the promenade. I have things to buy. A beach towel, €12. Turquoise bikini, €10. Matching sarong, €7. Swimming in the Ligurian Sea on a lazy Sunday afternoon? Priceless.

The sand is hot and the shimmering water cool to the touch. My toes slip in first and sink gently into the loose pebbles, and I feel the ground shift with the ripple of the waves. I inch forward little by little until my entire body is floating as light as a feather. It’s exhilarating and I find it hard not to laugh.

Much later, when I sit down to dinner at L’Osteria, the evening mass at the church of San Giovanni is just letting out. The door is ajar and I can hear the parishioners singing. On the street, a dog is barking playfully at a tabby cat, who retreats under the patio in utter indifference.

The symphony continues. And for the first time in a long time, I feel as though I am the conductor. 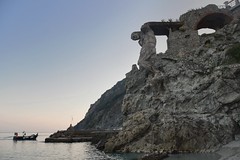 After dinner, I take a walk up to the statue of St. Francis of Assisi, and then down to “Il Gigante” and back, bumping into Scott and his son Ian along the way. The sun has set, the air is cool, and they’re eating gelato and brimming with enthusiasm for the Cinque Terre. They tell me it’s a magical place that will be hard to leave behind.

I smile and nod. Of course, I agree.