Rocambolesco (adj.) – fantastic, incredible, as in an experience

I’m walking to the train station again this morning, taking my familiar route down Via Roma and Via Feglina to the long dark tunnel dividing the “old town” of Monterosso from the “new.” When I emerge into the light and see the rows of beach umbrellas before me, I also see my fedora-wearing friend, the accordionist and his dog, and he pauses to wave hello.

Even on a slow regional train, the trip to Camogli takes only an hour, which seems well worth the effort for a village that Condé Nast Traveler recently called “one of Italy’s best-kept secrets.” I scan the article again as I make my way up the coast, the rhythmic sound of the tracks ringing in my ears. There is a description of the same “multi-story palazzi, painted in the muted pinks, yellows, and terra-cottas you find along this coast,” in towns such as Rapallo and Santa Margherita Ligure, “their deep-green shutters framed by trompe l’oeil flourishes.” But there are also assurances that Camogli is “far from the madding crowds” and “just-sleepy-enough” with its “under-the-radar calm.”

Perhaps. But not on a dazzling Saturday in June. 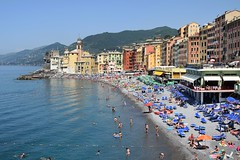 By the time I find the stairway that descends to Camogli’s waterfront, a wide stretch of pebble beach that arcs gracefully towards the 19th church of Santa Maria Assunta and the far more ancient castle of Dragonara, there are scores of sunbathers lounging on towels and deck chairs, and wading happily in the sea. The entire scene is so convivial that it has me rethinking the obsession American tourists have with “hidden” treasures, with experiences that depend not only on isolation, but also exclusion. Suddenly, it all seems rather churlish. I scan the crowd and see a young boy with a rod and reel fishing from a rocky ledge, a couple with a baby floating lazily on an inflatable raft, and a woman reclining with her knees bent, lost in the pages of a book. 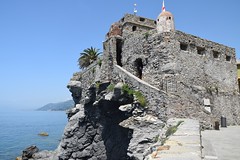 In the late-19th century, Thomas Hardy famously used the phrase “far from the madding crowd” as the title of one of his novels, but the phrase originates with Thomas Gray, an English poet who years before had penned “Elegy Written in a Country Churchyard.” It’s become something of a derisive catchphrase that urges escape from the frenzy of civilization.

I look again at the languid view before me. Personally, I think I’m already there. And I don’t mind sharing.

I scan the shops along Via Garibaldi and find another focacceria for lunch, this time settling on a thick slice of bread slathered in tomato sauce and cheese from Revello, as well as a hazelnut cookie, rolled and pinched on the sides, called a “camogliesi alla nocciola.” I stop at a jewelry store, Robe di Cuoio, and buy a corded bracelet with two seashell charms and a silver starfish. But mainly I wish I could stay longer. 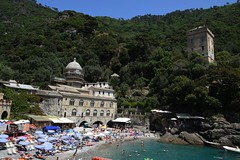 It’s early afternoon and time to push on to the abbey at San Fruttuoso, which is accessible only on foot or by sea. It’s a warm day with a blistering sun and I have limited time to explore, so I opt for the ferry.

It’s a fascinating place, nestled into a secluded cove between promontories marked by castles and lighthouses, and I wile away another hour or two discovering the monastery’s medieval cloisters and the burial vaults of the Doria family.

By the time I board the ferry again for my final stop of the day, I’ve grown weary and my shoulders and neck have reddened with a wicked sunburn. Yet as the boat rounds a bend and enters the harbor, the view unfolding before me nearly takes my breath away.

I’ve arrived in glamorous Portofino, and I’ve never seen anything like it. 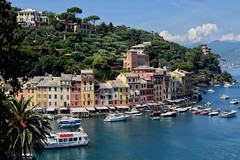 There are Italianate villas perched high above the town on hillsides studded with palm trees and cypress. Tall masted yachts are anchored in the harbor alongside smaller pleasure boats that gleam with brass and polished wood. And the town itself is a gauzy confection, hung with streams of colorful flags that create an atmosphere of perpetual celebration—a holiday without end—which is, I suppose, what it’s like to be rich and summering on the Riviera.

I spend some time window shopping for diamond baubles and silk scarves in shops like Rolex, Salvatore Ferragamo, and Louis Vuitton, half expecting to see Elizabeth Taylor emerging from Dior on the arm of Richard Burton. Then I head up the long, sloping path towards Castello Brown, stopping short at the tiny, tangerine church of San Giorgio. My legs are in open revolt and the view from here is stunning enough. 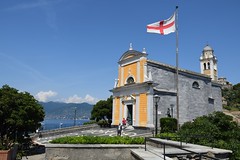 Back down at the harbor, I decide to sit and relax for a bit with a fruity cocktail at Caffè Excelsior, where the steady stream of well-heeled couples passing by reminds me of the way Robin Leach used to close each episode of Lifestyles of the Rich and Famous back in the 1980s, by wishing his viewers “champagne wishes and caviar dreams.” This is, I think, the closest I will ever get.

The ferry carries me back to Santa Margherita Ligure, where a train completes my circle back to Monterosso al Mare. It’s nearly eight o’clock by the time I slide my sunburned body into a quiet seat in the alley outside of Gastronomia San Martino. It’s a no-frills kind of place, where the menu is written on a chalkboard and orders are placed at the counter, but the chef is gregarious and kind and when a young woman delivers a cardboard plate of food to my table a short time later, the pansotto in walnut cream sauce that it holds is exceptional. The entire meal costs all of €11,50—less than the drink I had on the luxurious harbor front in Portofino—and that suits me just fine.