In October 2011, flash floods from a vicious storm devastated one of my favorite little corners of the world—the Cinque Terre, a hamlet of tiny fishing villages perched on the rocky cliffs that line the southern coast of the Italian Riveria.

Vernazza, in particular, was hit hard by the mud slides that followed. Just a year before, with a belly full of pesto and focaccia bread, I had snapped a postcard view of the town on a warm summer’s night, a memory fit for a daydream. The following winter, while knee deep in snow and ice back home in Vermont, I found that if I closed my eyes I could summon the bells of the lemon yellow church of Santa Margherita d’Antiochia, and I could imagine the rows of pastel houses that fold back from the snug harbor, watched over by the ancient Doria Castle and a fleet of small boats bobbing in the teal green sea.

The storm that fall brought a rude awakening. A headline in The Telegraph in London announced: “Villages All but Wiped Out as Storms Batter Italy’s ‘Cinque Terre.’” The scale of the disaster, they said, was “unimaginable.” A raging river of water and sludge had poured down the steep and narrow streets, which acted like a miner’s sluice, burying the towns in as much as thirteen feet of debris. The harbor in Vernazza, so stuck in my mind, was left silted and dry, its boats splintered like matchsticks.

Rick Steves, a long-time champion of the region in his guidebooks, said it was “as if nature had murdered someone I loved.” He was right. I felt it, too.

Nearly three years have passed and I’m eager to go back, but nervous, too, of all that has changed. Literature is replete with the notion that you can’t go home again. I’m about to find out, but first I’m having a lazy morning at the apartment in Florence, finishing chores of laundry and dishes. I pack a small suitcase with rolling wheels and listen to its rhythmic sound on the sidewalks and cobbled streets all the way to Santa Maria Novella station, where I’m booked on the 12:30 train to Monterosso al Mare. The journey is an easy one, with a change at Pisa Centrale, and before long I find myself pressed against the window of the train, excited by the quick snatches of sun and sea, as we hurl through long, dark tunnels towards the station. 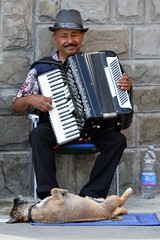 It’s three in the afternoon when I step out into the sun and onto the platform. A row of palm trees frames my view of the turquoise sea, and I pause for a moment to breathe in the air and to enjoy the energy of the tourists crowding the New Town promenade. Instinctively, I turn left, walking past symmetrical rows of beach umbrellas, and a sign (in English) that reads: “Homemade Sangria, Experience the ‘Drunk Ass’ Bucket.” I push onward, through the tunnel, and when I emerge into the quaint streets of Old Town, I see a dark-skinned man in a fedora, playing the accordion. I toss a few coins in a basket and then bend down to pat the belly of his dog, who is napping lazily at his feet. He nods at me and grins widely, and with that simple gesture, I know that life goes on and that people are resilient.

The Cinque Terre is alive and well.

I check into my room at the Hotel Margherita, where the tangerine stucco and green shutters look just as I remember. In fact, I settle into the same room as before, although the fragrant garden of basil and lemon trees I remember so well has been replaced by tomatoes and oranges. I kick back on the bed and think about how to spend my time. Over the next few days, I intend to head north, by train and by boat, to a collection of small seaside towns along the Italian Riveria— to Rapallo, Santa Margherita Ligure, Camogli, San Fruttuoso, and Portofino. But tonight, I long to see Vernazza. 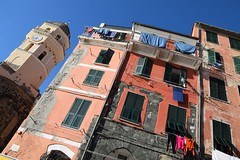 The train ride is short, and the summer’s night long with possibilities. I stroll down to the harbor to admire the view, and the rows of pastel houses that slide toward the sea like a melting dish of rainbow sherbet, but before long my stomach is begging for dinner.

Remembering Rick Steves’ colorful review, I decide to try Il Pirata delle Cinque Terre, a casual eatery owned and operated by a pair of Sicilian brothers name Gianluca and Massimo. To be fair, the food itself is nothing memorable, but the conversation certainly is! At the table next to mine, a woman from Boston is enduring a lecture on how “real” cannolis are made with ricotta. Nearby, an American couple has dared to order the chocolate cannoli, which earns a forceful rebuke. It seems I have stumbled not into the “Cannoli Twins,” but rather into the “Cannoli Nazis.” By the end of my meal, I’m half tempted to order the chocolate myself, to see if Massimo’s head might explode—I truly think it would—but I haven’t the heart. 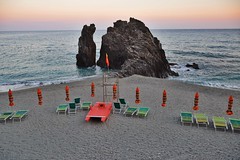 It’s nine by the time I arrive back in Monterosso al Mare. The sky is fading into a dusky pink, and the colorful chairs and umbrellas that line the beach have been folded away, standing guard like sentries awaiting the dawn.