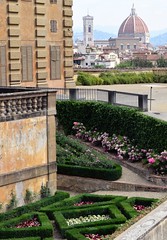 Years ago, on my first trip to Florence, I ventured into the Boboli Gardens. It was late in the day and I had already walked up the hill to Piazzale Michelangelo and back. My feet were tired and my brain overwhelmed by hours spent in churches and museums, absorbed in the art of Giotto, Fra Angelico, and Piero della Francesca. I had thought a stroll through the gardens would be a respite for my body and my mind, but I was wrong. It was a hilly place, situated in a large triangle between the Palazzo Pitti, Forte Belvedere and Porta Romana, and the challenging terrain—which was not apparent on the tourist map I carried with me—wore me out almost as soon as I arrived.

This morning, some six years later, I’m back to try again, this time on a fresh pair of legs before the heat of the day descends. I use my Amici degli Uffizi card to pick up tickets at the entrance to the Palazzo Pitti, and then move through the cool shade of the courtyard, into the sunlit space beyond. There’s an airy amphitheatre fanning out and up the hill, anchored at the center by an Egyptian obelisk. I follow the path up and reach the terrace of the Neptune Fountain, where the god of the sea has his trident in hand, as if to pierce a fish out of the murky green water below. 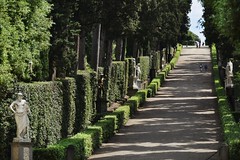 Up and up I go, toward the statue of Abundance, until I reach the Porcelain Museum and the adjoining Garden of the Cavaliers, where a row of pink roses are clinging to the iron railing at the edge of the terrace. I stop to catch my breath and survey the surroundings. The imposing Palazzo Pitti is to my back, and the red roofs of Florence lie beyond. Ahead is a yellow valley dotted with old palazzos, olive groves, and cypress trees. I feel as though I’ve traveled a long way in a few steep steps. I’ve wandered no further than the Medicis’ back yard, and yet as if by magic, I’ve been transported from the frenetic streets of the city, to the languid countryside of Tuscany, where I’d very much like to stay for a while. 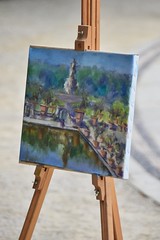 The morning hours turn to midday and then slip pleasantly into early afternoon. I stroll to the Kaffeehaus and an elegant terraced garden overlooking the city, then through a shaded avenue of cypress, flanked by statuettes, all the way down to an island pond near the Porta Romana gate, where an artist has set up an easel to capture the scene, much as John Singer Sargent did more than a century ago.

By the time I reach the Lemon House and the Buontalenti Grotto, I’m ready to head indoors. It’s been a memorable morning, lounging here much as Henry James did in the late 19th century, and it’s done much to change my initial impression. I think of Versailles for a moment, and about the manicured gardens of grand country estates in Britain. I suppose he was right about the Italian manner, “with flowers rather remarkably omitted, as too flimsy and easy and cheap, and without lawns that are too smart, paths that are too often swept and shrubs that are too closely trimmed.” Indeed, there is something wild and shabby about the Boboli Gardens, “here and there a dried-up fountain, and everywhere a piece of mildewed sculpture staring at you from a green alcove.” But the end result, as Henry James wrote, is an “irresistible mixture of nature and art” that rather inclines one to daydream.

I glance at my watch and head back the pebbled path. There are a multitude of museums to discover within the complex of the Palazzo Pitti, as well as a special exhibit of Jacopo Ligozzi’s work, including some fantastical naturalist and botanical drawings that has just opened in the Palentine Gallery. It’s only when a text message arrives on my phone that I break my gaze from the Raphaels, Titians, and Caravaggios. 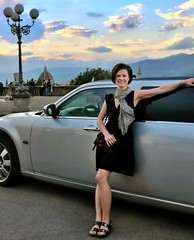 Some months ago, a reader from the Midwest had contacted me through my blog to ask for help in planning a special trip to Italy with his son. As it turns out, we’ve landed in Florence at the same time and he’s graciously invited me to join them for a sunset limousine tour of the city. They’re staying at the Hotel Davanzati on Via Porta Rossa, with my old friends Fabrizio and Tommaso, who’ve booked our ride through their sister company, I Just Drive, and so I happily agree to meet them there at 7:30, relishing the chance to catch up.

By 8:00, we’ve settled into the back of a Bentley limousine, with an interior far wilder than I could have imagined. There are curved leather seats in stripes of gray, pink, and blue, a thumping audio system, and a minibar awash in neon light. When we arrive at Piazzale Michelangelo, my kind benefactor offers to take my picture, and I strike my best “mine, all mine” pose while leaning against the door, my arm stretched wide across the roof of the car.

It’s an extravagance being here—arriving by limousine to watch the sun set over a glorious city, both brimming with history and the vitality of youth—but I’m grateful most for an evening of unexpected companionship. As a solo traveler, I’ve come to appreciate these fleeting encounters, and whether I ever meet this generous father and his charming son again, I’m glad we crossed paths here on such a lovely summer’s night. 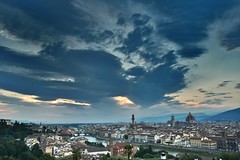 After a glass or two of prosecco on the return drive to Piazza della Repubblica, we joke that we should to stand up through the moon roof like Richard Gere in the movie Pretty Woman, but our driver, Leonardo, says that they’ve had to seal it off because people were throwing bottles out the window and into the street. “Italians can’t be trusted with anything nice,” he says, for a moment I’m reminded once again of the British tourist with the walking stick I met on the way to Fiesole.

By the time we part and I wish my new friends well on the remainder of their trip, the sky has darkened into a velvet black. It’s tempting to stay out late, walking the streets or listening to Claudio on the bridge, but it’s been a busy day and I still need to pack. I’m about to go on a vacation from my vacation. In the morning, I’m taking a train west in pursuit of palm trees and the Ligurian sea.