Fatta l’Italia, bisogna fare gli Italiani (exp.):  “We have made Italy, now we must make the Italians.”

I’ve watched the final laps of the Tour de France along the rue de Rivioli in Paris, and seen the Queen in her carriage during the Diamond Jubilee in London, but for me, Italian festivals have become something of a specialty. I was in Rome once on Republic Day where I joined the throngs for a grand military parade at Piazza Venezia. I’ve also witnessed the solemn “Procession of the Holy Blood” in Orvieto, and a stunning display of luminaries along the Arno River in Pisa in honor of the city’s patron saint, San Ranieri. This year, I’m going whole hog—I plan to see a medieval harvest festival in San Gimignano, Pope Francis on Corpus Domini in Rome, and a famous infioriata in the tiny Umbrian hill town of Spello the weekend after. And, of course, I’ll be front and center for the Calcio Storico here in Florence on the 24th. I wouldn’t miss that for all the world.

Today, it begins. Once again I’m in Italy on June 2nd—the country’s Festa della Repubblica—and so I’ve scoured the internet and The Florentine newspaper for a calendar of events. As I sip my morning cappuccino at Caffè Scudieri, I see that there will be a wreath laying ceremony in Piazza Unità d’Italiana, followed by a parade past the Duomo, all the way down Via dei Calzaiuoli to Piazza della Signoria. Whether the festivities begin at 9:00 AM, or 9:30, or even 10:00 is generously open to interpretation, but Ecco l’Italia. That’s Italy! 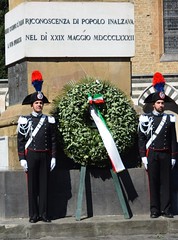 For a place known for its ancient Roman ruins and Renaissance art, Italy is a surprisingly young country. Until a series of revolutions and independence movements in the 19th century—led by men whose names now grace streets and squares and monuments—it was little more than a peculiar collection of city-states ruled by powerful families and institutions. There was the Pope in Rome, the Medicis in Florence, the Doge in Venice, the Sforzas in Milan, and so on. Today’s “Republic Day” is a national holiday celebrated every June 2, that honors not the challenge of unification itself, but rather the referendum in 1946 that finally established a republican form of government after World War II and the fall of fascism.

As I run that complicated history through my brain, and find that the dots fail to connect, I decide that it’s better to be safe than sorry on the time. I down the last of my coffee and make my way to Piazza Unità d’Italiana, which is near the church of Santa Maria Novella and the train station. A crowd has started to gather, and soon after I arrive two Carabinieri in ceremonial dress place a wreath by the column at the center of the square, which has inscriptions commemorating the fallen soldiers and sailors of Tuscany, from the first Italian war of independence in 1848 through the First and Second World Wars. A brass band plays the national anthem, servicemen and servicewomen salute as the flag is raised, and I watch as the colorful bands of red, white, and green fabric catch the wind. 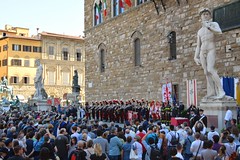 As the group moves in procession towards Piazza della Signoria, I rush ahead and up the steps into the Loggia dei Lanzi to get a better view, just beside Benvenuto Cellini’s bronze statue of “Perseus with the Head of Medusa.” And slowly they come. There are local officials accompanied by men in elaborate Renaissance costumes, a military band keeping time to the beat of a drum, and combat veterans proudly displaying their regimental banners. They fill a stage in front of the city hall, in the shadow of Michelangelo’s “David,” and the ceremony continues. Without a meaningful grasp of the language, there’s little I understand of the speeches, but as an outsider and a tourist there’s much to appreciate in the pomp and pageantry of the day.

Luigi Barzini once wrote that Italians are “naturally inclined toward arranging a spectacle, acting a character, staging a drama.” Here, I am observing Italy at its best, and nothing proves this more than the moment when firemen climb from the windows of the Palazzo Vecchio to unfurl a large Italian flag down the side of the building. The crowd gasps and bursts into applause, as once again the band strikes the opening notes of the national anthem, “Il Canto degli Italiani,” the Song of the Italians.

It’s then that I notice a woman standing next to me in the crowd. Aside from her small stature and advanced age, her appearance is unremarkable. She is the kind of Italian nonna we might expect to see in the kitchen making pasta, wearing an apron and orthotic shoes, but when she starts to sing, her voice is clear and unmistakably proud:

Brothers of Italy,
Italy has woken,
Bound Scipio’s helmet
Upon her head.
Where is Victory?
Let her bow down,
For God created her
Slave of Rome. 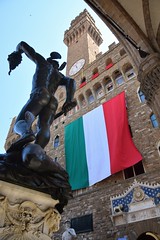 After all these years, Italy is still a land of regions, of provincial conflicts and contradictions. And unification is still far from complete. There is a popular motto, variously attributed to Massimo D’Azeglio and Ferdinando Martini that says: “Fatta l’Italia, bisogna fare gli Italiani,” or “We have made Italy, now we must make the Italians.” It seems fitting to remember that on Republic Day, although outside the magnetic field of World Cup soccer, perhaps that’s easier said than done.

There is the Italy of the North and the Italy of the South, the Italy of Botticelli and that of Berlusconi, the Italy with the crumbling economy (where one in four young people are unemployed) and the Italy where such trivialities are easily cast aside in pursuit of la dolce vita. There is, in short, a certain schizophrenia to Italy that I struggle to understand, and perhaps that is part of its mysterious allure.

As the anthem comes to a close, the voice of the Italian nonna beside me fades and I turn in time to see her disappear into the crowds that are draining from the square in all directions. I wish I had had the temerity to talk with her, to ask her if she had lived here during the war and been witness to the German bombs that destroyed all of the bridges in Florence connecting the historic center to the Oltrarno—all except for the Ponte Vecchio, which, it is said, Hitler spared because it was too beautiful. And how had she felt about the country’s transition from monarchy to fascism to republicanism, all within her lifetime? In short, what had the day’s festivities had meant to her?

I regret that I have no picture to remember her by, but later, as I sort through the files on my camera, I hear her singing in the video I took, and that small memento makes me smile.

Despite my apartment on the banks of the Arno, which encourages a certain illusion of Italian life, Barzini is right. As a foreigner, my Italy is “mainly an imaginary country, not entirely corresponding to the Italy of the Italians.” As he puts it: “behind the turbulent and picturesque agitation of Italy, behind the amiable, festive, and touching spectacle, behind the skillful performances, real life is something else.”