At the beginning of one of my favorite chapters in E.M. Forster’s A Room with a View, the young Lucy Honeychurch remarks on how pleasant it is “to wake up in Florence, to open the eyes upon a bright bare room… to fling wide the windows, pinching the fingers in unfamiliar fastenings, to lean out into sunshine with beautiful hills and trees and marble churches opposite, and, close below, the Arno, gurgling against the embankment of the road.”

I’m reminded of that passage this morning as I leave my apartment and wander down the lungarno and across the Ponte alle Grazie. In part, it’s because the scene is largely unchanged by the passage of time, especially on a Sunday morning in late Spring when the sun is peeking out beneath a canopy of white clouds and the sound of church bells are ringing in the distance. But I’m thinking of Forster, too, because my itinerary for the day has been largely inspired by a scene that takes place later in the book, in the hillside town of Fiesole, a few miles outside of Florence. It is there that Lucy kisses George for the first time, in a field of violets high on a bluff overlooking the city, and the moment is so enchanting that I can’t help but be drawn to the place itself. 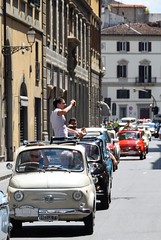 Writing in 1908, Forester has Lucy and her companions arriving in Fiesole by horse and carriage, but here in the modern world, I’m forced to resort to the No. 7 bus, which departs from Piazza San Marco. It’s an easy walk of roughly twenty minutes—past David and the duomo—but I find myself meandering off course time and time again. First, the still of the air is broken by a cacophony of car horns near the church of Santa Croce, which I feel compelled to investigate. A caravan of vintage Fiats is snaking through the streets, the drivers honking wildly while their passengers stand up through the sunroofs taking pictures. 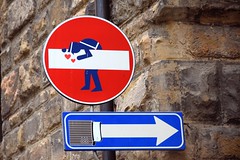 Next, I spot a street sign that’s been cleverly altered by a French artist named Clet Abraham. The red ground with a white bar means “Do Not Enter,” but the figure of a man in uniform has been added and he is leaning over to embrace it with a kiss, a pose reminiscent of a famous photograph taken on V-J Day in Times Square in 1945. Impressed by the ingenuity of it, I circle round and round in the streets near the Accademia in search of more. In one, the white bar is being carried by an angel with tiny wings, and just below it a heart has been threaded through a left turn arrow, as if pierced by Cupid’s bow. It’s addictive, this game of Where’s Waldo I’ve been playing. I know that it’s time to push on, and yet I suspect that Forster would have sympathized, for as he puts it: “Over such trivialities as these many a valuable hour may slip away, and the traveler who has gone to Italy… may return remembering nothing but the blue sky and the men and women who live under it.” 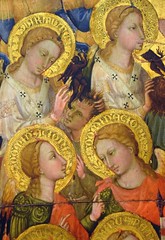 Just in front of the church of San Marco, I join a queue of British tourists waiting for the next bus to Fiesole. There’s an ATAF signboard announcing its arrival in two minutes and I’m pleased by the good timing, but after I turn around to snap a picture of yet another Clet street sign, the board has been altered to read twenty-seven minutes. Puzzled, I ask my companions what happened. An older man with a walking stick, white hair, and a plaid cap sighs deeply, throws his hands into the air, and says: “That’s Italy.” 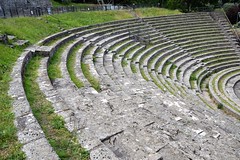 By the time we arrive in Fiesole, it’s just past one o’clock. I take a few minutes to explore the small antiques market in Piazza Mino that pops up on the first Sunday of the month, and then I make my way across the street and around the corner to the tourist information office to buy a combination ticket for the major sites in town—an ancient Roman amphitheater and archeological park, and the Bandini art museum, which has a fine collection of glazed terracotta figures by Andrea della Robbia. Both are enjoyable, but admittedly I feel more drawn to the signs that point toward the passeggiata panoromica. Fictional though she is, I want to see what Lucy saw. 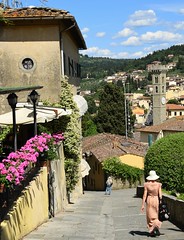 As they were “nearing the edge of the promontory,” Forster describes how the “view was stealing around them,” while bushes “shattered it into countless pieces.” He’s right. It does. On I go, pressing further from the center of town, up a long, slow hill toward the open sky where the view begins to form at last. “[S]he could discern the river,” he says, “the golden plain, other hills… Light and beauty had enveloped her. She had fallen on to a little open terrace, which was covered with violets from end to end… From her feet the ground sloped sharply into view, and violets ran down in rivulets and streams and cataracts, irrigating the hillside with blue, eddying round the tree stems collecting into pools in the hollows, covering the grass with spots of azure foam. But never again were they in such profusion; this terrace was the well-head, the primal source whence beauty gushed out to water the earth.”

I use the long lens on my camera to scan the Arno valley beyond its green rim of trees, and I spot the façade of Santa Maria Novella, the red dome of the Medici Chapel, the tower in Piazza della Signoria, and even the palazzo facing the river where the Bardi apartment awaits my return. But soaring high over everything, just as it had when my flight descended into Florence’s Peretola airport, is Brunelleschi’s masterpiece, the cathedral of Santa Maria del Fiore—the duomo—Saint Mary of the Flower. The word reminds me again of Lucy and her violets and of what happens next in the story.

“Standing at its brink, like a swimmer who prepared, was the good man… [George] saw radiant joy in her face, he saw the flowers beat against her dress in blue waves. The bushes above them closed. He stepped quickly forward and kissed her.” 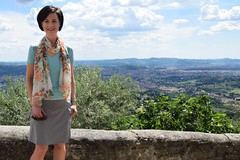 I’m squinting into the sun now. The afternoon’s rays are hot on my face and for a moment I have to blink back tears that are not entirely due to the brightness of the day. I am here and Florence is at my feet. It’s a sublime moment, spoiled only by the fleeting wish that I had a good man of my own to kiss. Traveling solo is an empowering experience and one I have never regretted, but it can also be lonely at times.

I close my eyes again, more slowly this time, and the remorse, or melancholy, or whatever it was, fades away. An Australian couple walks by and they ask if I’ll take their picture. I say yes, so long as they’ll snap mine.